Oh It Was Terrible 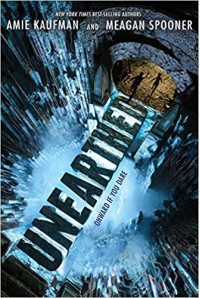 1.5 stars. Audiobook. Narration 2.5 stars- Quick thought: A bad remake of Indiana Jones and The temple of Doom.
Long, long and mostly boring inner dialog that made me tune out. This was a book where I just wanted the characters to stop talking, yeh not good. The female MC was so irritating, she had this uncanny ability to do stupid stuff and then talk herself into thinking it was brilliant. She's a cliche in all ways, a street rat trying to save her sister from slavery, a school drop out who is actually a mathematical genius, perfect because the male MC isn't at all and they need it to save their lives. It's not that she's smart that bugged me it was how it suddenly came up and then became her crown, and her old persona was forgotten. The male MC was the son of a famous notorious man who is on a mission to prove his daddy right. He's English, and unprepared for this planet. yes they are on another planet. So we have a street wise scavenger and rich college grad, to save them all. There is an uncomfortable bit of romance going on that does not fit in the story at all.
The adventure is them trying to solve an ancient mystery left by an alien race filled with booby traps. Oh and yes they are also being chased by evil villains armed with guns. Very Indiana Jones with out the fun entertaining parts. They are able to solve puzzles and escape traps, amazing right ? Then when danger is nearest they rest/sleep and get caught. So they out smart, dumb down and out smart back and forth till finally at the end we see what the real deal is. The doom that only these two misfit kids could figure out and just when you think things might resolve, they get caught again.
Stupid